All of us felt so glad when the huge building loomed up before us. The tiring steep climb had drained us completely.  It really looked grand in its expanse and size, just like its name- Hotel Grand. Overlooking the famed Mall Road, it gave a beautiful view of the verdant Shimla hills.  Full of giant chinaar and deodars trees, the hotel had put up boards warning the guests not to entertain monkeys which were there in the premises in large numbers.  After settling in the huge suite we decided to roam out.  A nice cup of tea was what we required to energize us.  The hotel one had been tepid and tasteless.

As one descended the hotel complex, the immediate street below was lined with small kiosks with a varied fare. Having a penchant for exploring foods typical of a place, I find the street side and the unbranded eateries the best for it. The fact is that even a simple thing as aloo paratha tastes differently in the different parts of the country.   Our eyes however searched for a tea-stall, and there was one, a few steps away.
The sixty year something shopkeeper welcomed us with a smile. Warmth oozed out as he lovingly asked- ‘Tea? The parathas are not yet ready. I am going to knead dough for them.’  ‘Yes, two cups of tea’, I said. The kids had their chips packets to munch on. 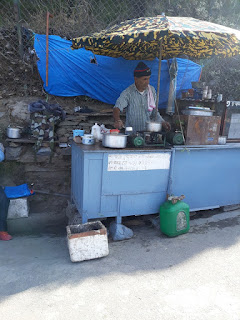 A large wooden box with an aluminum sheet top doubled up both as a store and a kitchen countertop. There was a kerosene pressure stove on the side.  A big aluminum bhagauna with milk in it, a pan for preparing tea, a rolling pin and, an iron griddle for frying parathas stood on the countertop.  On the side were a few plastic jars with eatables like freshly prepared   mathri, a few disposable paper cups and glasses for serving tea and, a weighing scale.  But the most interesting thing along with these things was a gun and a sling shot!

‘No babu’, he replied as he grated ginger to put in the tea-pan. ‘It isn’t a toy-gun. It shoots rubber pellets. This is to scare the monkeys away if they don’t stay away with the sling shot.’

We could hear the shrill cries of the monkeys as they ran, played and fought among themselves on the corrugated roofs of the nearby buildings and the hotel above.  ‘There’s one’, my younger son said pointing to one lurking behind a huge deodar tree on the mountain side at the back of the tea stall owner...  He picked up the gun and gave it to my son. ‘Take this and point it towards it’, he said. ‘It has no pellets in it because having had the taste of this earlier, now they scamper away by the mere sight of this gun’, he laughed.  And true! As soon as the monkey saw the gun it immediately leapt away.

The tea was nice and endearing and so was the ambience.  We became its regular for the next few days of our sojourn. 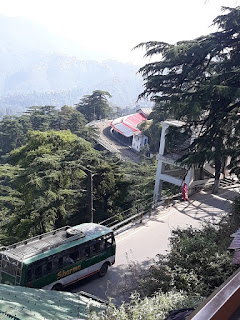 It was the third day of our stay. Early morning.  The quiet of the place broken only by the sounds of the swaying branches of the cedar and poplar in the mountain winds, twitter of the birds and, the screech of the monkeys. The hills were waking up for work, while the tourist, perhaps, still enjoying the languor of their warm beds.  My wife and I were sitting on a makeshift bench, a plank of wood resting on two rocks, waiting for our tea as the stove was being pumped to be lit. The shop had already been spruced up for the day.  The distant hills were draped in mist. The Shimla railway station was visible and we could see an engine coughing up puffs of smoke and sounding its horn as it lunged with all its strength. Soon the morning trains from Kalka would be chugging in and I could imagine the porters on the platform waiting anxiously for the passengers to strap their heavy luggage on their back and bring them up the steep mountain-roads.

A group of about six people suddenly descended on the stall.  They all had their luggage with them and I could gather from their talk that they were on their way down to board their train.

‘Yes of course’, the shop-owner replied. ‘Give me a moment. I am already preparing for those two persons. I’ll make fresh tea for you all after this’.

‘We are in a hurry', he said impatiently and looked around, perhaps to see if there was any other tea stall nearby. Unfortunately there wasn’t.

‘We will wait. Please serve them first ‘, I said to the shop owner from my perch.  I thought they had their train to catch; besides I was enjoying myself, immersed in my surroundings and I could wait in that serenity forever.

They were served their tea and I busied myself again in the quietude as our tea was getting prepared.

My reverie was broken by a slight commotion.  The shop keeper was holding a note of rupees 500 and was asking for a smaller denomination note. None in the party seemed to have a smaller note than that.  The shop owner said that it was early morning and they were the first customers of the day, so how could he have change for that big amount of money. But finding them adamant he started rummaging in every nook and cranny. Finally he could muster the required change in various denomination notes and some coins.

The young man painstakingly counted  it and then remarked- ‘It’s one rupee less’. The shop owner asked him to take that one rupee later in the day because he didn’t have it at the moment. ‘But I am going to board the train’, he replied. And then suddenly a coin lurking behind the stove caught the shop owner’s eye and he gave it to him.

It was later in the afternoon that we again got a chance to go to the stall. We were done for the day a little too early in our sightseeing and decided to get back to our hotel to rest.  Climbing up the hill, a nice cup of tea was the thing we desired. The shop was empty of customers and instead of the elderly gentleman we were wont to see there was an elderly lady with that same warm smile spread all over the creases on her chubby face.

‘Yes?’ she asked affectionately. ‘Tea for the two of us’, my wife said. ‘Okay’, she said and set about the preparation.

‘Where has uncle gone? Do you keep the shop in the afternoon?’ my wife asked.
‘No, no’, she replied. ‘Actually he has gone to fetch some material for the shop and that’s why I am here’.

‘Won’t you too have tea?’ she asked my kids.

‘No, we don’t drink tea’, the younger one replied.

‘Oh! That’s so good. Tea is not good for children’, she smiled to them.

She handed over two paper cups of tea to us in a short while and then took out a sizeable helping of fresh namak para from a punnet on a paper plate and gave it to the kids.  ‘It was prepared just half an hour ago. You will love it’, she said.

She asked their age and class and where were they from as she carried on her work.
The paras were really crispy and tasty as we also partook a little.

‘How much? , I asked the lady handing her a fifty rupee note after we had finished our tea.

‘Twenty’, she said as she returned me rupees thirty.

‘You forgot to add the paras', I replied.

‘What paras?’ she a smiling frown. ‘I have grandsons of their age. How could I let them just sit having nothing while you too had you tea? That was from me’

I seemed to hear the bells ringing at the Shyamla Devi temple below.