SMOKING GUN Someone's Gotta Do It

Someone's Gotta Do It

This entire hullabaloo about smoking is so painful. The statutory warning on cigarette packets sets my heart afire. The frequency of inhalation increases to exhale the anger within. As if we smokers smoke merely for the sake of it. As if the world would become a better place if all of us stopped smoking once and for all. I exhort the smokers of the world to unite, as we have nothing to lose but our lungs. Only united can we ward off the prospects of a smokeless world. Only united can we plead our case, enlighten non-smokers and make them see the fire of service burning within us. Has anyone wondered how our roads are made, our electricity lines put up, and our irrigation canals laid out? It's we, the unobtrusive social servants, who make this possible. It's we who choke our lungs with nicotine and provide revenue for the society to move. It's we who knowingly and willingly die a slow death to make civilisation live. While governments across the world are concerned about rising unemployment, we are the ones whose smoke sustains so many — tobacco cultivators, cigarette makers, admen, dentists, cancer specialists... the number is legion.

I must concede, however, that we smokers have private ends to serve too. We inhale to fight pollution. Surprised! Well one needn't be, for it is based on a simple medical philosophy. Aren't we given weakened doses of viruses to make us immune to various diseases? The same belief governs us smokers. We inhale small amounts of tar, nicotine, carbon monoxide and what not to fight environmental pollution. Has anyone given a thought as to how our distaff side would have felt liberated had there been no smoke? Non-smokers seem to be patently anti-feminist. As the two genders smoke together, their mingling smoke-rings signal the burning away of gender differences and their coming together. Enveloped in the smokescreens they feel empowered to conquer the evil world. People seeking a curb on smoking forget its importance in community life. The mere threat of losing the 'hukka-pani' relationship has brought the mightiest to his knees. Non-smokers should become aware of our contribution to the world. Damned be the definition of a cigar as a roll of tobacco with fire at one end and a fool at the other. A generous fool should be more welcome than self-centred wisdom.
Posted by SKAND at 6:33 AM 2 comments:


Soul Curry
His daughter's keeper
There is no black or white in life, only shades of grey prevail, discovers Skand Shukla
TIMES NEWS NETWORK THIS incident took place some years ago at a remote district in Uttar Pradesh, where I had been posted as the district education officer. It had all the characteristic features of a backward district, a low literacy rate — merely 27.2 per cent for women, being one of them. One afternoon, as I entered my chamber after a gruelling field tour and wading through a waiting crowd of applicants and complainants, I found myself face to face with a young lady, who was giving my steno a tongue-lashing. "Your SDI school is corrupt, Sir," the young lady said, directing her anger at me. I offered her a seat and a glass of water to calm her down and asked her to tell me her problem. She had applied for the post of shiksha mitra in the primary school of her gram panchayat, where she stood first in the merit list of applicants. However, she said, the SDI of the block was not forwarding the list to the district office. I explained that the delay did not cheat her of the opportunity, as her ranking would remain unchanged. But, it was not as simple as that. "I'm married and my gauna (when a bride goes to her in-laws' home for the first time) is after a couple of months. The SDI is waiting for me to go to my sasural so that the boy, who is placed second in the list, can move up to the first ranking as I get declared the resident of a different gram panchayat," she said.
"Perhaps, the SDI has got some bribe for this. I want to work, Sir. I want to be financially independent," she added, almost in tears. I assured her of justice and sent directions to the concerned SDI to be present with the records the next day. Later that evening at home, I was told I had an urgent visitor. The man, in his late forties, fell at my feet when he saw me, exclaiming, "I'm the father of the girl who met you at your office regarding the shiksha mitra issue. Please don't appoint her to that post." I was shocked. "But why?" I demanded. "Your SDI is not to blame at all. The fact is I myself got complaints filed to delay the selection process. I am a poor man and got my daughter educated with great effort. She was married a year ago. The boy, placed next in the ranking, has given me money for stalling my daughter's appointment so that when she leaves for her in-laws' home, he gets the job. The money this boy has given me will help me organise her gauna ceremony," he said helplessly. He was in tears, caught between fatherly duty and love, while I stood dazed, unsure of the administrative action to take — to give the young girl a taste of emancipation, or to support her father in his quest for his social responsibilities. I could do neither as I got my transfer order the next day, before I could get to the file. I remain unsure to this day of the decision I would have taken.
Posted by SKAND at 6:31 AM No comments: 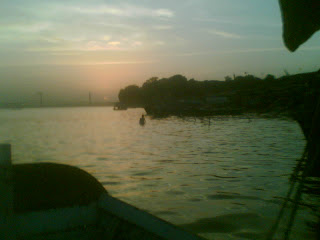 The characteristic that differentiates Allahabad from all other cities in India is indolence. A laid-back attitude is cause and effect of the city's life. This ambience perhaps made this city give to the world many renowned philosophers and litterateurs. Government offices and the university give sustenance to economy and culture in this city of babus. The ubiquitous tea shops that line the roads have immense socio-economic importance. These are the places where students who throng the city with the dream to make it big in life undergo socialisation. These tea shops are to Allahabad what pubs and discotheques are to Pune and Mumbai. Here our middle class 'chills out'. Sitting on wooden benches beneath the tamarind and pipal trees, they discuss weighty social and political issues, cast an appreciative glance at beauties passing by while sipping sweet, syrupy tea from small 'kulhars'. The impersonal market system of the modern economy has not swamped the city yet. Tailors, barbers and grocers still have personal equations with their clients, not only in suburban mohallas but also in upmarket Civil Lines. The paanwala knows what his regular customers prefer. The leaf used and the proportion of kattha, chuna and zarda is tailored to the specific tastes of each customer, often without prompting. He must have an elephantine memory given that his regulars run into hundreds. Paan shops are great levellers. Everybody, irrespective of his social standing gets the same treatment at the shop. The other great equalisers are the cycle rickshaws that are by far the most popular means of public transport in Allahabad. The few autorickshaws that are seen are a recent phenomenon, as the city has spread a little beyond the Ganges in Phaphamau and Jhunsi, and beyond the cantonment in Sulemsarai. But they are not happy additions. How can the smoke-bellowing cramped autorickshaw ever compete with the happy informality offered by the cycle rickshaw? One is afraid though that things are changing. The Mughlai paratha and egg roll at The Moghals, or at Meals on Wheels, are making way for the fare served by multinational eateries like McDonald's. But given Allahabad's love affair with local traditions, new entrants are unlikely to wipe out the golden oldies like Coffee House, Netram, Sulakhi and Hari Namkeen. Rapid change is for others. In Allahabad, we like taking our time.
Posted by SKAND at 6:18 AM No comments:

Those were dreadful days. My eyes inevitably turned towards the bathroom floor, the towel and the comb to see how many had been lost. Still in my mid-twenties, the thought of going bald was nightmarish. All tricks were tried to retrieve every lost hair getting tonsured during monsoon; applying exotic oils, henna, egg-yolk; washing hair with all sorts of things like reetha, shikakai, lemon-juice and cleverly advertised shampoos with bewildering ingredients actually, almost anything anybody suggested. The barber was asked not to massage one's head too strongly lest the endangered species fell faster. A comb was a must in the back pocket to straighten any strand gone awry, lest a bald patch was revealed to unknowing classmates, girls in particular. New styles of combing hair were devised to cover the sparse spots. Medications were sought to bring back my lost glory. Even the promise that a particular medicine would not grow the hair already lost, but retain what remained, was music to my ears and raised my dampened spirits. What bouts of envy were endured whenever someone with dense foliage was seen! How small one felt when someone taller stood by one's side! For he could certainly see my balding pate. But with time, as my hairline receded further, it was no longer a secret. I approached my late twenties and then, even my family started expressing concern. Who would marry a bald man, they started thinking.
I, on the other hand, turned to cultivating a sense of stoic resignation to the inevitable. Beliefs like a bald person is blessed with riches, his personality manifests maturity and intelligence, he need not trouble over greying hair, and that God hid with hair the heads he didn't like were held strongly to maintain a confident self amidst those copiously gifted with plumage. They are things of the past. I don't look down on the bathroom floor, on the towel and the comb now. No hair can be found on them because none are left on my head to fall. I still have one problem, though. When washing my face it is difficult to know where the forehead ends and the head begins.
Posted by SKAND at 6:08 AM No comments: