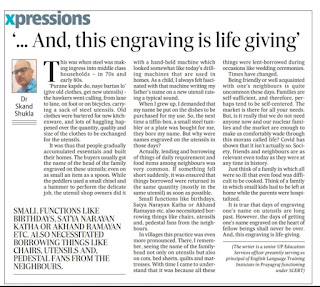 ...And, this engraving is  life-giving

This was when steel was making ingress into middle class households – the 70s and early 80s. ‘Purane kapde lo, naye bartan lo’ (give old clothes, get new utensils) - the hawkers went calling, from lane to lane, on foot or on bicycles, carrying a sack of steel utensils. Old clothes were bartered for new kitchenware, and lots of haggling happened over the quantity, quality and size of the clothes to be exchanged for the various utensils. If the peddler was willing to give a small steel bowl for a set of small child’s cloth or a thali for a chiffon sari, the homemaker may not have been ready to settle for anything less than a big bowl for the child’s clothes and a weighty steel pan for the sari.

It was thus that people gradually accumulated essentials and built their homes.

The buyers usually got the name of the head of the family engraved on these utensils; even on as small an item as a spoon. While the peddlers used a small chisel and a hammer to perform the delicate job, the utensil shop owners did it with a hand-held machine which looked somewhat like today’s drilling machines used in our homes. As a small child, I always felt fascinated with that machine writing my father’s name on a new utensil with a typical ghirr sound.

When I grew up a bit and perhaps wanted things to call my own, I demanded that my name be put on the dishes to be purchased for my use. So the next time a tiffin-box, a small steel tumbler and, thali were bought for me, they bore my name.

But why were names engraved on the utensils in those days? The practice seems to have faded-away with the passage of time.

I asked my mother the reason once, and she said, ‘so that they do not get mingled with the other utensils and get returned to the rightful owner when something is sent in them to the neighbours or they send something to us’. Actually, lending and borrowing of things of daily requirement and food items among neighbours was very common- so common that it wasn’t even noticed. The non-existence in those days of facilities like phones and home-delivery services, and availability of essentials like food-grains, sugar and kerosene oil only at the ration-shops, made the dependence of neighbours on each other inevitable if something fell short suddenly. It was ensured that things borrowed were returned in the same quantity (mostly in the same utensil) as soon as possible.

Similar was the state in villages; rather, more pronounced. There, I remember, seeing the name of the family-head not only on utensils but also on cots, bed sheets, quilts and mattresses. With time I came to understand that it was because all these things were lent-borrowed during occasions like wedding ceremonies. Caterers and tent-house providers were businesses unheard of in those days.  A wedding ceremony was an occasion not limited to a family; it involved the whole village community.  It was an occasion involving the prestige not of one family, but the whole village.

Times have changed. Being friendly or well acquainted with one’s neighbours is quite uncommon. Social distances have grown over the years. Families are self-sufficient, and perhaps, therefore tend to be self-centered. The market is there for all your needs. The middle class has become affluent.

But, is it really that we do not need anyone now, and our nuclear families and the market are enough to make us comfortably wade through this morass called life?

Covid has shown that it isn’t actually so. Society, friends and, neighbours are as relevant today as they were at any time in history.  Just think of a family in which all were so ill that even food was difficult to be cooked. Think of a family in which small kids had to be left at home while the parents were hospitalized. None could have done without helping hands.

Yes it’s true that those days of engraving one’s name on utensils are long past. However, the days of getting one’s name engraved on the heart of fellow beings shall never be over.  And, this engraving has always been life-giving.