Bias from her perspective

This article was published was published in the HINDU on 2nd february 2016 but it was truncated and its import got diluted . The link is                  http://www.thehindu.com/opinion/open-page/open-page-bias-from-her-perspective/article8180006.ece

A little Girl’s Reflections on her School Books 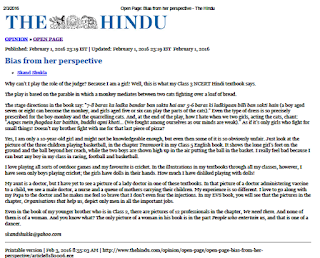 Why can’t I be the judge in the play? Because I am a girl! Well, this is what my class 3 NCERT Hindi text book says!! In that chapter which contains the play on the parable in which the monkey is the judge between two cats fighting for a bread, the stage directions so clearly say – ‘7-8 baras ka ladka bandar ban sakta hai aur 5-6 baras ki ladkiyaan billi ban sakti hain.’ (a boy of 7-8 years of age can become the monkey and girls of 5-6 years can play the parts of the cats). Even the dress has been so precisely prescribed for the boy-monkey and the quarreling cats. And, at the end of the play, how I hate when we two girls, acting the cats, chant -“aapas mein jhagdaa kar baithin, buddhi apni khoti…” (we fought among ourselves as our minds are weak). As if it’s only girls who fight for small things!  Doesn’t my brother, many a times, fight with me for that last piece of pizza?
Yes, I am only a 10 year old small girl and might not be so knowledgeable but, even then, some of it is so obviously unfair. Just look at the picture of the three kids playing basketball, in the chapter ‘Teamwork’ in my class5 English book. It shows the lone girl’s feet on the ground and the ball beyond her reach, while the two boys are shown high up in the air putting the ball in the basket. I really feel bad because I can beat any boy in my class in racing, football and basketball.
I love playing all sorts of outdoor games and my favourite game is cricket. In the illustrations in my text books through all my classes, however, I have seen only boys playing cricket while the girls have dolls in their hands. How much have I always disliked playing with dolls!!
My aunt is a doctor but I have yet to see a picture of a lady doctor in a book. In that picture of a doctor administering vaccine to a child, we see a male doctor, a nurse and a queue of mothers carrying their children. My experience is so different. I love to go along with my Papa to the doctor and he makes me feel so brave that I don’t even fear the injections. Oh! How I pity those boys who are so frightened of injections.
It’s not only about the doctors. If you see my EVS book you will see that the pictures in the chapter ‘Organizations that help us’, depict only men doing all the important jobs. There are five different pictures of various professionals- the police, doctor, army personnel, workers in a post office- and none of them has a woman. Even in my younger brother’s book who is in class 2, there are pictures of 12 professionals in the chapter, ‘We Need Them’, and none of them is of a woman. And you know what? The only picture of woman in his book is in the part ‘People who entertain us’ and, that is of her as a dancer. Even in my book the chapter ‘Our Heritage’ has women in all its pictures- the pictures being of various dances in our country. Hey! Everybody, even a kid, knows that women are performing duties in every field. My father showed me in the newspaper the other day that they were the lady scientists who made the Indian Mars mission so successful.
I have heard so much of a lady Arunima Sinha who reached the top of Mount Everest even though she had lost her foot in an incident; but I can’t understand why my text book has the picture of only men as mountaineers. Don’t these writers of the text books read newspapers?
And it’s not only about the outside world. Even the description at some places of the household chores make me think them to be so odd! Just sample this from a chapter ‘Drop by Drop’ in my NCERT EVS book - ‘His mother and sister have to walk a longer distance to fetch water… While walking on the hot sand their feet burn and blisters just cannot be avoided. When the train carrying water comes they are very happy. Madho’s father goes to fetch water in his camel-cart’.  Is it all right that while the women travel on foot, the man does it on a cart? To my little girl’s mind it somehow doesn’t feel all that nice.
I don’t know if I am a bit weird and that all of the above seems strange to me only or, something’s really amiss in our books. If it’s so, somebody please do something as what we learn in our childhood stays with us forever and makes us what we are in our adulthood. Why do they think that it’s only boys who can jump high, love cricket and football or, do jobs like flying a plane or working in a steel plant? I hope people writing the books start believing that even boys weep and the girls love to play boisterously.

Dr  Skand Shukla
(An Officer of the Provincial Education Services and was a visiting Fellow to the Arizona State University, U.S.A)

Labels: Article published in The Hindu 2-2-16