For Allahabad to be a SMART city

For Allahabad to be a SMART city
( 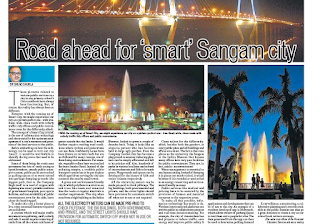 Published in HT Special Supplement on its 18th anniversary )

Those pictures related to the various public services in a city in any primary school Civics text book have always been so fascinating. But, of course, the reality has always been so remote from them. Now, however, with the coming up of SMART city, we might experience our city as a picture-perfect one – one with tree-lined, wide, clean roads with orderly traffic; tidy offices, public conveniences (even for the differently abled) etc, etc.
The concept of a SMART city, in brief, is the use of information technology and electronics for the optimum management of a city’s resources and provision of the best services to the public.
Before embarking on how the technology can be used to turn our city of Allahabad SMART, it would be worthwhile to identify the big sores that are to be addressed. Some of them being- the roads sans pavements but with lots of cattle acting as speed breakers, non-existent clean and safe public transport system, public parks encroached as parking spaces or at worst turned into garbage dumping grounds, the biggest park i.e. the Company Bagh itself in need for oxygen with the depleting tree cover, pitiable condition of the government hospitals, poor sports facilities, and non- availability of public conveniences even for the able leave alone the handicapped.
To make this city a nice place for living some essential features required are as follows.
A traffic system which will make the flow of traffic non-polluting, swift, orderly and safe. It would require removing cattle from all the streets and lanes of the city and creating cattle sheds or piggeries outside the city limits. It would further require creating road conditions in which cyclists and pedestrians can use them confidently and safely. Lanes have been drawn on certain roads but are not followed for many reasons one of them being the encroachments for example by vegetable sellers as on the very busy Stanley Road. Instead of the polluting tempos a credible public transport system has to be put in place which apart from serving the city connects the nearby small towns.
A green and environmental friendly city in which polythene is a strict no-no and the trees like the neem and tamarind line the roads at regular intervals. This city which, when seen from a high building as the Indira Bhavan, looked so green a couple of decades back, looks like an alopecia patient who has become  bald in large ugly patches. Even the Company Garden that has become a playground to amateur tinkering planners can be simply afforested and left to its pristine self. Also, the hundreds of parks in various localities can be freed of encroachments and filth to become green and playgrounds and spaces for leisure for kids and senior citizens respectively.
All the electricity meters can be made into pre-paid ones to ensure non-pilferage. The big buildings, both governmental and private, and the street lights should have provision for automatic switching off lights when not in use or not required.
Clean toilets for the differently abled besides both the genders at every public place and all buildings and offices are a must. The fact is that even such places as the University, the Sangam Place or the Indira Bhawan housing many offices have very poor facilities for public conveniences. They are in fact public- inconveniences!!
Waste management is essential in any human setting. Instead of dumping it at places not much visited, it would be good if it is recycled or used as fuel in an energy conserving and environmentally friendly manner.
Public services like medical, policing and sports have to be ensured by the provision of human and material resources to the respective areas.
To make the above possible, information technology has much to do. Wireless interconnected platforms can involve public in collaborative projects and real time decision making. For example, the City of Amsterdam has had projects to reduce traffic, save energy and improve public safety. It accepts proposals from the citizens for applications and developments that can be of use to the city. An example of a resident developed app is Mobypark, which allows owners of parking spaces to rent them out to people for a fee. The data generated from this app can then be used to determine parking demand and traffic flows in Amsterdam.