The mercury dipping towards normal in the thermometer did not gladden me. The last few days had been of enviable pleasure. I could lie in bed for as long as I liked. No alarms and missed calls rang early in the morning for the badminton courts.
I was freed of my duty to get my five-year-old ready for school. Instead, I would ensconce myself on an armchair on my terrace which overlooks a lawn with flowering plants, bushes and a few trees.
Accompanied by mugs of hot tea, I was able to read the whole newspapers, down to the ‘tenders’ space; the only disturbance being the chirping of birds. I had all the time in the world.
How luxurious it felt to be in total oblivion of the mundane world of everyday. I was dead to the hum-drum of the office, the never- ending complaints, the ominous files in which what is left unsaid in the ‘noting’ is of far greater relevance than what is expressly written.
The obnoxious cellphone was mostly kept switchedoff and nobody complained. It was, however, occasionally switched on to read ‘get-well’ messages and to feel flattered by the enquiries made after my health.It’s so comforting to know that there are a few in this wide selfish world who do spare a thought for you.
Yes, I was down with viral fever – the common one, not the one that has been in the news recently and which is so potent that it sends shivers down the whole neighborhood, along with the platelets in the patient.

Though this common fever does have its own set of troubles — painful throat, body ache and, a weak digestive system — at times it is welcome; perhaps because one gets all these symptoms nevertheless every evening by the time office hours are over.
In our schooldays, it would give us a break from the dreariness of the school and, for office-goers it makes available a respite from the drudgery of the office.Those related to medicine for their living welcome its arrival for obvious reasons, but a friend recounted an interesting one related to his childhood spent in a small town of the 70s. In those times the sliced bread and glucose biscuits were a rare delicacy in mofussil towns and, since its partaking was invariably advised by the doctors during flu, its delectation made the kids desirous of getting a bout!
In a couple of days I shall be taking up my responsibilities again.The slight weakness and cough will also be gone in another few days but, for long shall linger that indescribable feeling of comfort during the week I was down with flu rightly described as ‘ regal solitude’ by Charles Lamb. 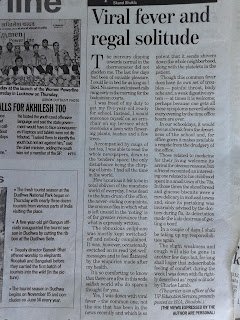