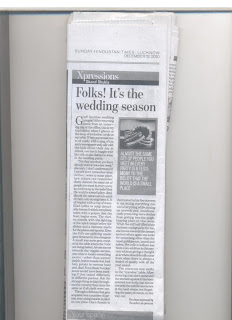 God! Another wedding tonight! After returning home from an unnerving day at the office this is my expression when I glance at the heap of invitation cards on my table. When one would love to sit cozily with a mug of tea and newspaper and, talk with the kids about their day at school, one has to haggle with wife on the clothes to wear at the wedding party. “Not that one dear, you have already worn it twice last week”, she says. I don’t understand if I myself don’t remember what clothes I wore to some place, how others can remember them. The almost the same set of people you meet in every party is a testimony to the belief that the world is a small place. And, almost the same menu in each of them only strengthens it. It all begins with a cup of ¾ foam filled coffee or soup (invariably tomato!) which everybody takes with a prayer that the feast begins soon. The clarion sounds with the lightening of the spirit lamps below the dishes and, a clamour starts for the plates and spoons. Even the DJ’s ear-splitting music gets drowned in the clangour. A small war zone gets created at the table where the ‘rotis’ are being baked. As one moves towards the veggies section, one tries to locate something exotic- other than paneer (palak, butter masala and, kadhai), potato in various hues and, daal. Even these ‘routine’ items would have been exciting if they tasted differently in different parties. But the strange thing is that throughout the country they taste the same as if all chefs were one. Through a deftness that gets acquired over a number of parties, everything eatable is piled on one plate. One’s finesse is then tested in his/her success in not letting everything mix with everything while picking up morsels and, simultaneously protecting ones clothes from getting into the neighbouring plate or, vice versa. When the still half-filled plate has been consigned to the bin, one moves towards the dessert section where again one looks for something other than the usual gulabjamun, imarti and halwa. Hot milk in kulhars has been a late addition in this section without giving a thought as to where does this milk come from when there is always a dearth of quality milk all the year round. The attention now shifts to the ‘vyavahar’ table. After ensuring that one’s name and the amount against it has been entered correctly, one moves towards the exit for an encore at the next venue, not forgetting the paan, of course, on the way out.
Posted by SKAND at 7:47 PM