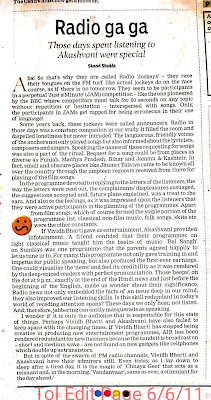 Aha! So that’s why they are called Radio ‘Jockeys’- they race their tongues on the FM turf , like the horse- jockeys do on the race course, as if there is no tomorrow. They seem to be participants in a perpetual ‘Just a Minute’ ( JAM) competition interspersed with songs. Only, that the participants in JAMs get rapped for being erroneous in the language! Some years back they were called announcers. Radio in those days was a constant companion in our study. It filled the room and dispelled loneliness but never obtruded. The languorous, friendly voices of the anchors not only played songs but also informed about the lyricists, composers and, singers. Speaking the names of those requesting for songs was also a part of the ritual. Request for a song could be from places as diverse as the Punjab, Madhya Pradesh, Bihar and, Jammu & Kashmir. In fact, small and obscure places like Jhumaritalaiyan came to be known all over the country through the umpteen requests received from there for playing of the film songs. The non-inclusion of names in these request programmes was one constant complaint in the programme devoted exclusively to the replying to the letters of the radio-listeners. The way the letters were read out, the complainants’ displeasures assuaged, the suggestions accepted and, future plans explained, was a treat to the ears ; and, also to the feelings, as the listeners were impressed upon the fact that they were active participants in the planning of the programmes. Apart from the film-songs, which of course was the staple portion of the programme list, classical non- film music, folk songs, skits etc. were also played.
If the Vividh Bharti gave us entertainment, the Akashvani provided infotainment. A friend confided that they were the programmes on light classical music that taught him the basics of music. ‘Bal Sangh’ on Sundays was one programme that the parents agreed happily to our tuning to. For many, this programme not only gave a training and impetus to public speaking, but also gave the first ever earnings. One could visualize the ‘news’ as it was rendered in the perfect pronunciation of the language. Those ‘beeps’, on the dot at 9.00 PM, exactly at the end of Hindi news and just before the beginning of the English, made us wonder about its significance. The radio news not only embedded the facts of an issue deep in our mind, they also improved our listening skills. Is this skill redundant in today’s world of receding span of attention? These days we only hear, not listen. And, therefore, jabbering can easily be masqueraded as speaking.
I wonder if it is only the audience that is responsible for this state of things. Perhaps the Vividh Bharti and Akashvani have also failed to keep apace with the changing times. If the Vividh Bharti has stopped being creative in producing new entertainment programmes, AIR has been rendered comatose for new listeners because the airwaves it is broadcast on – the short and medium wave- are not found in the new gadgets like the cell phones which double up as transistors of yore.
In spite of the swarm of FM radio channels, Vividh Bharti and Akashvani have their admirers still. Even today, as I lay down to sleep after a tired day, it is the magic of ‘ Chhaya Geet’ that acts as the relaxant and, in the morning ‘Vandanvaar’, same as ever, the stimulant for the day ahead.
Posted by SKAND at 6:54 PM