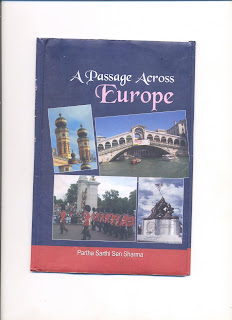 Partha Sarthi Sen Sharma’s – A Passage Across Europe’(published by Sahitya Bhandar, Allahabad- Year 2010) is no ‘Lonely Planet’ prototype. It does not tell the reader where, when and, how to visit the tourist spots on Europe; it records the experiences and feelings of the writer when he chanced to visit the continent. This subjectivity imparts the literariness to the 160 page book which, in a flowing prose, expresses the writer’s sense of excitement, wonderment and at times disappointment on seeing things he had till then read, heard or, seen only in pictures. He himself tells this in the ‘ Explanation’, that the book is not a product of writings during his stay in Europe but “record(ed) them later, as the intervening months made my thoughts and views clearer and sharper”- a` la Wordsworthian ‘emotions recollected in tranquility’ .
The narrative abounds in poetic prose- “the castle of Ljubljana…appears like a benevolent patriarch, sitting atop the hill, looking after and blessing the lives of the citizens below”; “it all appeared too beautiful to bear”; “views not only of the city but also the views into the city”; “the river banks are overflowing with green weeping willows, drooping on to even greener river below”- (all from chapter 1). But then, such a language is natural to express the “soaking in the atmosphere…a feel of the things” rather than the ‘things’ themselves. This is not to say that the book lacks in describing ‘things’ either. The description, however, is accompanied by the author’s views and digressions that go on to only enrich the narrative. A remembrance of Amrita Shergill on seeing paintings in Hungary, the comments on the colonial past of India ( pg 134) or, the shabby way in which we preserve the places and things associated with our litterateurs(pg 154), are some of the instances. In fact the narrative is rooted in the Indian connection throughout. We learn, for instance, that unlike in India where most of our cities grew on either of the banks of a river, the European cities are sprawled on both sides of rivers with a number of bridges connecting them. Many of these bridges being tourist hot-spots. The noise and crowd at the Budapest station seems similar to any Indian Railway Station.
The writer doesn’t find everything hunky dory in Europe – his wife’s wallet gets pilfered in Italy; he finds the traffic in Rome ‘chaotic’, the Dam at Amsterdam dirty and, the Royal Palace there unkempt. But he refers such incidents jocularly. He for instance, in referring to the Italian waiters, says- “Italian waiters are, as a matter of rule, cheeky to the extent of appearing to be discourteous …but I can’t blame them for discrimination. They are supremely and uniformly irreverent towards everybody and anybody”. Regarding the Trevi Fountain he writes- “…it is so crowded that one feels that one has seen more human heads than the fountain itself”.
The writer, we learn, loves to explore the surroundings on foot and thus gets to see many places which are not in a routine tourist’s itinerary. He sees, observes, describes the sights and, explains the context (historical, scientific- as in the description of the Pantheon, political etc.) in the most simple manner. We also get to know various tid-bits- the ‘French fries’ were invented in Belgium; England, Britain, UK are not one and the same and, so is the case with Netherlands and Holland; Louis XIV built a hotel for invalid soldiers; the gypsies and Slavs also suffered along with the Jews at the hands of the Nazis; so on and so forth.
There are a few spelling mistakes which could have been avoided by a better proof-reading. I, as a reader, would also have liked to know more about the daily lives of the westerners, the lives in the poor quarters (if any) and, details of the local food, clothing and festivities. The readers would also have been richer had the writer been to any of the Scandinavian countries – particularly regarding their reputation in being corruption and pollution free- or perhaps not , because the writer has kept himself away from commenting on the contemporary political, economic and administrative issues related to the countries he travelled. It is a good read for all who love traveling and literature.