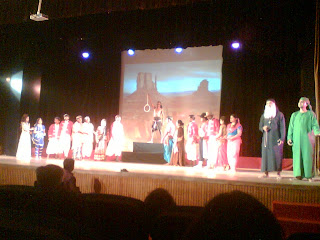 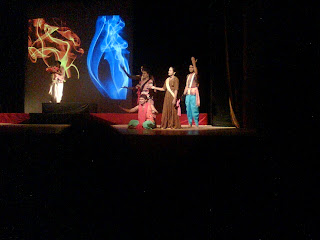 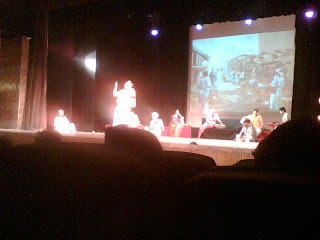 16th August was an evening well spent. Amidst tumbrels, kettle-drums, dholak and, the masterly rendering of the verses by the actors( Uttam Rai as ‘Sufi’ in particular) made the NCZCC auditorium come alive with the staging of the nautanki ‘Andher Nagri’. The nautanki art form is one of the forms of folk-theater in our country. The ‘Swarg Repertory’ has staged many plays in this form not only all over the country, but, even abroad at the World Theater Festival 2004.
The play ‘Andher Nagri’ by Bhartendu Harishchandra was adopted in the nautanki form by the Director, Atul Yaduvanshi, not only because of his fervour for re-establishing the folk-art but also to attack the systemic degradation our society is undergoing. It begins with the entry of a saint with his two disciples in the town of ‘Andher Nagri’ ruled by the ‘Chaupat raja’ where everything was available in a penny- ‘tak ser bhaji, tak ser khaja’. The timelessness of the play is seen in the portrayal of the market where representatives of many religions, regions and professions are seen. The contemporary is referred in phrases like- “Aayaa viklang varsh/ Kaat angutha liya tab” in a new definition of modern Eklavya. The saint decides to leave the place immediately on learning of its strange ways but one of his disciples, Gobardhan (aptly played by Gaurav Bajaj), chooses staying back. His greed gets the better of him. When a woman’s goat gets killed by a wall that fell and, she seeks justice, a farcical court drama begins. Nor the culprits could be identified, nor the woman be compensated for her loss but since justice had to be shown to have been done, poor Gobardhan is sentenced to death because the noose could fit his neck. The timely appearance of his guru saves him, who by his wit, makes the King hang himself.
The music, light and stage decoration were all perfect. The wailing of the woman whose goat had died and, her dress were the only weak spots.
The play with its attack on the system and pelf, closes on a positive note with the end of the whimsical and arbitrary authority and, a clarion call for all of us to wake from our slumber.
Posted by SKAND at 8:49 AM